Cork City has a long history of exposure to flooding, both fluvial and coastal. The city has experienced approximately 300 significant floods since 1841. In recent decades, a series of both rainfall and tidal-related hazard events have highlighted the city’s increasing vulnerability to flood risk. The floods of 2009, for instance, resulted in €90million worth of damages to private and public property and infrastructure. In 2014, serious flooding resulted in a further €40million in damages. Flooding events of a similar scale occurred in the Winter of 2015/16, and again in Autumn 2020. 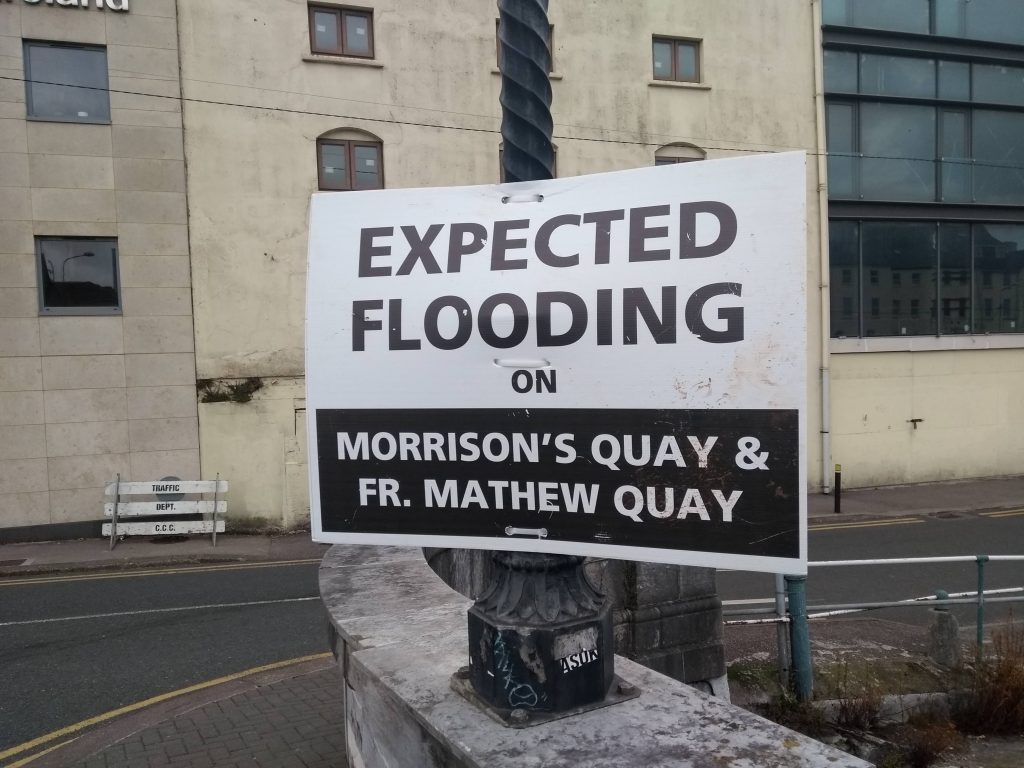 Cork’s vulnerability to flooding arises from its particular geographic circumstances. Situated between dividing streams of the River Lee, Cork City’s central business district sits on an estuarine island in the Lee Valley with steep slopes on two sides. These features mean that fluvial flooding can be particularly impactful during wet winter months when the surrounding valley slopes are already water-logged. Cork’s estuarine location also means that tidal flooding during times of coastal storm surge can be especially impactful.

Each of the floods of 2020, 2015/16, 2014 and 2009 significantly impacted Cork’s city centre, causing damage to commercial businesses, public infrastructure and private residences. Without appropriate flood mitigation efforts, these impacts are expected to increase in frequency and severity in coming decades, for two reasons. First, Cork’s population is growing rapidly, with an expected 50% increase from 2020 population levels by 2040. Cork City Council’s development plan aims to accommodate this rising population through urban densification and re-development of the city’s (formerly industrial) lower docklands area. This location is highly exposed to coastal flooding extremes. Second, climate change is likely to increase the frequency and intensity of both fluvial and coastal flooding events due to increases in extremes of rainfall and storm surge, as well as a rising rate of sea-level rise.

To manage these risks, Cork City Council (CCiC) and Ireland’s Office of Public Works (OPW) have initiated a series of programmes and plans to enhance the city’s flood risk management and to better adapt to anticipated climate change. Most significantly, the OPW have proposed the Lower Lee Flood Relief Scheme (LLFRS) that is due to begin construction in 2022. This program of works includes a combination of flood forecasting and warning systems, revised operating procedures for upstream dams, and a significant upgrade to the city’s waterside defences. CCiC will be developing a Local Authority Climate Action Plan, which will be a statutory requirement every 5 years to address the city’s remaining significant risks from flooding and other climate change hazards.

CCiC intends for the REACHOUT project to directly inform and assist the development of their climate action plan, as well as any potential future upgrades to the LLFRS. As part of this project, a series of risk modelling, hazard data collection and adaptation planning tools will be tailored to the specific needs of CCiC’s adaptation planning program. Additionally, the project will provide important learning and training programmes for both Council staff and key climate adaptation stakeholders in Cork, to ensure that they can make best use of the tools and information available to effectively adapt.